The Fourth Time’s A Charm! 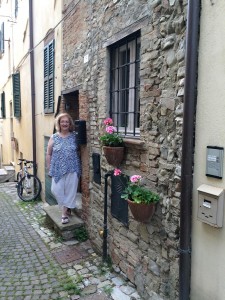 This is the fourth summer we have spent at our modest home in Umbertide. By this time little rituals have sprung forth. At the Wednesday market we chose from the various multi-colored petunias and geraniums deciding on the perfect ones to sit outside in the window boxes located on each floor of the building. This year we were offered pink and white speckled geraniums. They go in the planter outside the kitchen window. The frequent thunderstorms have yielded water but the blossoms have suffered a bit from the winds.

Less fun is paying yearly taxes. First we have to find out where to pay them. Each year seems to hold a different location. 2016 – the post office. This is a short drive away. Once there we have to decide which button will give the correct ticket for service. Luckily a young woman was able to help. We then had to stand for about thirty minutes until our number was called. Surprisingly many numbers were called and no-one showed up. I am not sure whether the machine had problems or people got tired of waiting. We again lucked out as the person helping knew what he was doing and our transaction took little time, not so for several others.

After that we hurriedly left to return some extension cords (wrong plug size) to a department store about 30 minutes away. Traffic road work held us back and I wasn’t sure we would make the 12:30 closing. Many stores in Italy close from 12:30 to 4:00. We made it to Casagrande in time but another thing typical of Italy is that many businesses are closed on Monday morning, Casagrande being one of them. We decided to take a photo so information will always be close.

One man’s disappointment can be another’s opportunity. Turning around to go back, I noticed a sign to a store I had never heard of before. We followed the signs and ended up at a new shopping centre. It was shopper’s haven, many different kinds of stores, most being in the modest price range, including an assortment of eateries. Yum.

Due to the large lunch, we returned to another ritual and that is gelato for dinner. There are two shops in walking distance. One offers a nice patio, friendly owners, and generous portions. The other is a shorter walk and a bit richer offering.

While the rituals keep one grounded, it is the unusual that keeps one attuned. As a joke to keep me from enjoying half a pastry for breakfast one morning, Mike said, “Look at the band coming down the street.” Of course I looked, as Mike stole the treat. I looked because it is not unusual to see a band coming down the street and sure enough the next evening, I heard music and there was the band. What got me laughing though, was they played “When the Saints Go Marching In,” – not an expected selection on an evening in Umbria!

2 Responses to The Fourth Time’s A Charm!