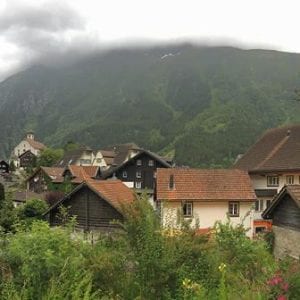 A quaint Swiss town where we ate dinner. Wouldn’t have found it if we hadn’t been driving.

This summer Mike and I decided to visit Scandinavia and because we had never seen the scenery and thought that a road trip would enhance the journey. Using a car for travel has its advantages in that you can see more things and are not beholden to a tight schedule BUT it has it challenges as well. The driver, in this case, Mike will be tired at the end of the day. Germany must be undertaking a major infrastructure project as everyone (and we went on many) of the autobahns that we traveled were under construction adding up to two hours to our daily travel. Maintenance of European highways are funded in part by tolls and vignettes. The following in no particular order are some of my take-aways that might help if you ever plan to travel in Europe by car (or any other mode of transportation).

We are very glad we took this trip but on the ferry over to Denmark, a German couple made an accurate observation that Americans tend to spend little time in one place preferring to move on. We were living proof of that so we feel we got an overall impression which was short of details. Our next trips will involve less moving around and more exploration of one place. One of my favorite lodgings was in the countryside of Lower Saxony in Germany. It was small resort/conference center and was very peaceful and quiet. I am looking forward to staying at more places like that.