Another Saturday Night in Umbria 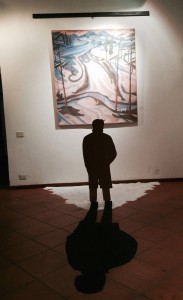 Man and shadow are part of the painting.

We received an invitation to an art show about 45 minutes north of Umbertide. The exhibition was located in a palazzo (palace) in the center of the historic district. It is only open to the pubic once a year, so in addition to seeing paintings, we were able to glimpse a little bit of an upper class Tuscan home.

The artist, Vincenzo Calli, has a unique style, blending old techniques with new. I especially enjoyed how he created a “3-D” element by adding sculpture to the painting.

Upon leaving the exhibition, we noticed that the narrow street in front of the building had been barricaded for what looked like a race. The runners were two and three-year-old boys and girls. The organizers walked the children about a block away and in corrals separated by gender, they raced their way back to the finished line, seeming to enjoy the cheers from the sideline crowds. 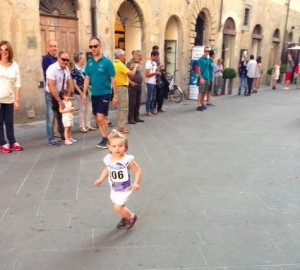 The last place but cutest racer.

Our next stop was the number one restaurant (according to TripAdvisor) in the walled city of Citta di Castello, an Umbrian town about 20 minutes north of us. The friendly owner server us over sized plates of pasta so I was only able to enjoy one course.

When we arrived back in Umbertide, the town was lit up for a festival. At the base of the Rocco (a former guard tower now an art gallery), a stage was set up with inflatables and fair like vendors. We stayed for a bit watching what seemed to be a warm up acts for something else. We had been told that Cuban dancers were expected. Unfortunately the hour was late and so we left (not before Mike stopped at the local bar to check out the ongoing World Cup game between Germany and Ghana). 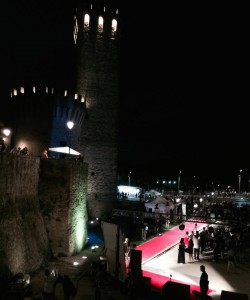 Several minutes after we readied for bed, I heard the unmistakable sound of fireworks. Our bedroom window points toward the Rocca and we were treated to a show. 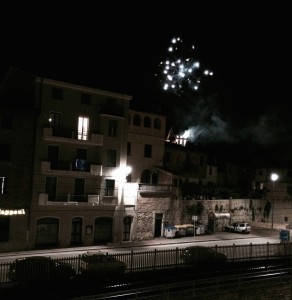 Fireworks outside our window

All of this is to point out that when the evening began, we were going to an art show. As it turned out there was much more to see and do. This was not a special holiday; it is how these people live.