I have wanted to visit France since my two years of French instruction in high school. Being Italian though, Italy came first. This summer I finally was able to travel through this beautiful country. Whereas Italy takes you back to the Romans, France seems to have settled on the middle ages. Rolling hills and farmland are dotted with blocked shaped farms facing an inward courtyard and on occasion a castle pops up at the top of a hill.

I feared that we might not be welcomed, as we are obviously not French and there seems to be if some are to be believed an aloofness to the members of host country but nowhere for the week we spent in this country was that the case. I remembered more French that I thought I would and was able to communicate our needs.

We did learn that gestures are not necessarily universal. We split and enjoyed one plate of crepes and Mike gave the server a “thumbs up,” to share how good he thought they were. Several minutes later another plate arrived, so Mike was forced to eat some more. I told him no more friendly gestures for the rest of the trip. 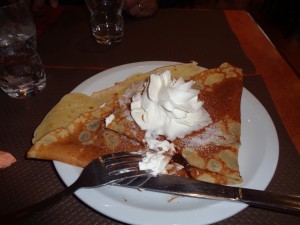 We spent most of our time in the area of Normandy. This part of France is framed by its large and lush hedgerows. On some of the back roads they actually touch a car on both sides. While beautiful they proved to be deadly for the Allies as they made their way inland. The hedgerows are perfect hiding places for weaponry.

Our first visit once we arrived was to Omaha Beach and put us on what our tour guide later referred to as the second part of this area. It is surrounded by cafes and summer homes, making it difficult to imagine the chaos of seventy-one years ago. The next day we found part one. It is there, especially when the tide is out that you can begin to understand what the soldiers faced on that cold June morning. At this time of the year the waves and wind are rough, and it was no different on D-Day. Soldiers came in from hours of preparation that included being huddled down in full pack – wet. They had to come in at low tide to try to avoid barriers placed on the beach by the Germans. That meant much more land to cover before hitting the cliffs above. Though not sure of the exact date the Allies would arrive the Germans were there and prepared. It is difficult to believe that anyone made it through this barrage of obstacles and enemies. 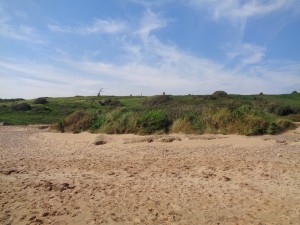 Omaha Beach – the view is from the water.

Our second stop was the American Cemetery, a short distance away that faces the beach as well. It is here that over nine thousand men and women are buried. Symbolic memorials, simple crosses, and patriotic music made this a very emotional experience. 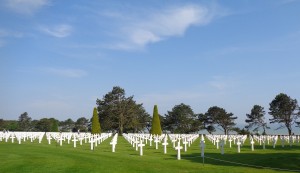 The rest of the trip included sites used in “Band of Brothers.” This helped us to understand how the Allies had to fight for small pieces of land using strategy, skill, and just pure luck. The area of Normandy is still filled with German bunkers and war memorials. It is a living museum.

We saw so little in such a short time that return trips are a must.