A Weekend in the Big Apple 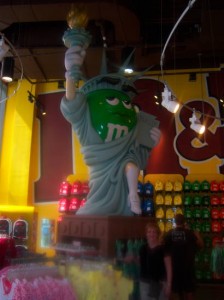 Lady Liberty as an M&M

Six years ago I visited New York City for the first time. Deciding that I wanted to spend Thanksgiving and my birthday in this busy metropolis, we scheduled a four day trip. It didn’t disappoint but we weren’t able to find time for a big musical and Mike has regretted that.

I decided to treat Mike (and me) to another visit. This time it was his birthday and we made sure the trip included a big musical. In fact, we actually saw two!

We flew into Newark on a Friday evening, which proved to be a pleasant and rather inexpensive way to access the city. Packing lightly, we left the plane, to find a train and then a subway, which was one block from our hotel. The concierge recommended a delightful (and authentic) Italian restaurant around the corner. It was located in a basement with a piano bar. The owners painted rural scenes from Italia on the walls so that we seemed to look out at the country rather than a dark, dank cellar. I had homemade pasta that was just like Grandma used to make and tiramisu she did not, but it was one of the best I have ever had. Unfortunately in the heart of Manhattan we paid for this dearly.

Saturday was theater day but not before a trip to M&M World, and  a walk up and down Broadway to Times Square. Our first musical was a matinee at the Gershwin Theater, “Wicked”. I had only heard good reviews from friends and family who were able to see the production when it came to TPAC last year but I really didn’t know much about the story or music. It was one of the most amazing shows I have ever seen. Elphaba, aka “The Wicked Witch of the West” has her own story, one not seen in the original Oz movie but this version is brought to light by Glinda the Good Witch. Despite the lack of famous names involved in the show, the set was intricate, the music good, the acting great and I was overcome by the emotions that the production renders. Simply,  I was verklempt!

After the show, Mike made a phone call to a friend who lives in Manhattan for a pizza recommendation. Her choice was the same one we got the last time we visited New York – John’s Pizza. It is an old establishment that began in the lower East Side and spread. This one is located in a former church with four real wood burning ovens and the pizza is primo!

That evening we went to the St. James Theater (coincidentally next door to John’s) and saw “An American Idiot.” Even though I only knew about seven of the “Green Day” songs in the show, it didn’t matter. An American Idiot is the story of three disillusioned teens who choose different paths to try to overcome the apathy of suburbia. The producers used the set as well as the actors and music to tell the tale. Filled with television sets embedded into the wall that flashed images and slogans, the audience is caught up in the frenzy that is An American Idiot. The beat and dancing kept us on the edge of our seats for the ninety minute (no intermission) show. Due the nature of the message, this is NOT a show for children. An after show piece of cheesecake brought an end to this marvelous day.

On Sunday, we awoke tired and mellow from all of the previous day’s excitement and decided to let the day unfold with little planning. After breakfast we wandered uptown and found ourselves in front of St. Patrick’s Cathedral right as mass was beginning. It seemed like a sign so we went in and were very glad that we did. The priest was obviously used to a tourist congregation and preached accordingly.

The only dent in the weekend was our final choice before heading back to Newark. We walked over to the Museum of Modern Art and after paying $30.00 each for a ticket discovered that the floors which contained most of the well known art work were all closed so we had to settle for little know (by us) work. In the spirit of modern art we weren’t sure how we were supposed to appreciate a hay bale, walking stick and old shopping cart, each a display of art.

New York City is not cheap. We traded in some points and got our hotel and one of the shows for free. The hotel (The Hilton Garden Inn Times Square) provided a free French breakfast each morning, since we were Hilton Honor members. That helped.

New York City is always awake, noisy, and filled with people on a mission. You must plow ahead with your plan or you might suffer a sore arm as I did. Allowing people to get on the subway ahead of me (even though I had been there first) I almost didn’t make it on so pushed the door back open with my arm. If you put on you “New York State of Mind” when you arrive you will find much to see and appreciate. 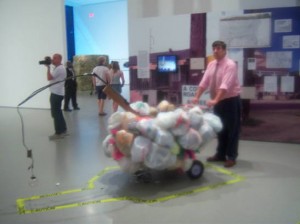